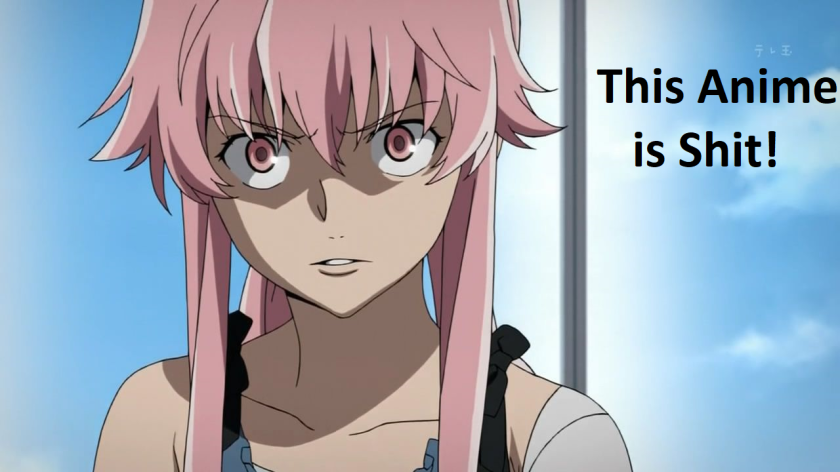 Hey everyone! Today we’ll have a little discussion about dropped anime series. I have stopped watching numerous anime series without finishing them. Most of these I plan to go back and complete when I have a better attention span and more time. However, when I say dropped anime, I mean the ones that I will likely never finish because they’re not worth it to me. Some people drop anime series frequently, while others wish to watch from start to finish even if they aren’t enjoying the anime. What do you think? Do you drop anime series? Do you plan to get back to them later?

Since I’m a bit curious about this topic, I started wondering what kind of things lead me to dropping an anime. So today, I’ll go over some of my reasons and give examples. I would love to hear from other anime fans about what your reasons are for giving up an anime. Leave a comment if you have time or interest. Now then, let’s get started.

Lack of Interest and Irrational Annoyance

Sometimes, I drop an anime out of a neutral lack of interest. The chief examples of this are popular and classic shounen series. I dropped Naruto and Bleach, with no plans to continue. (I’ll probably never finish Detective Conan or One Piece, but at least for those, it’s likely I’ll watch a few episodes here and there.) I respect those famous series; I certainly don’t call them bad, or feel annoyed with them. But since they don’t capture my attention for whatever reason, there seems to be no reason to spend further time on them.

There are some anime series that make me wildly infuriated, sometimes for no apparent reason. It’s an irrational inability to tolerate certain shows. I don’t know exactly why it happens, though I can usually think of some small, vague things that are annoying. But that’s no reason to actually get angry. I suppose it’s part of having Borderline Personality. My likes and hates are both more extreme than what you normally find. Highschool of The Dead, Gate, Working, and Konosuba are examples of shows I loathe without a clear reason.

Sometimes I stop watching an anime due to ethical issues. After all, I believe in the general rule: “If you don’t like it, don’t watch it.” There are two good examples I can think of: Flip Flappers and Dakaretai Otoko. The issue with Flip Flappers was the excessive sexualization of the main characters, who are children. It’s lolicon fanservice. Watching even a few episodes of this anime made me feel outraged and disgusted, so I dropped it.

Dakaretai Otoko is a popular yaoi anime. Yaoi in itself is fine, but all to often, it contains sexual scenes where one of the men clearly did not consent. In Dakaretai Otoko, one man is constantly sexually harassed by the other. The worst part was, his discomfort was treated as comical. So I quickly dropped this gross anime as well.

Occasionally, too much fanservice will also make me give up on anime. This is not one of the more common reasons, though. A recent example is Fire Force. The fanservice character Tamaki got on my last nerve. Even besides her, the sexualization of other characters was also over the top. If there had been a better plot, I probably could have put up with it. I generally dislike the combination of shounen and ecchi fanservice.

The next example I want to use is The Rising of The Shield Hero. From what I saw, it seems like a decent enough anime. But I couldn’t feel any sense of connection to the central characters, nor was I very interested in the fantasy world the show sets up. This is another case of dropping an anime due to disinterest; however, it’s a distinct type. It is the failure to connect to the story’s characters on any level (emotional connection, trait admiration, love of the character design, similar personality, etc.). This is a pretty big issue for me. A similar case is Overlord. I watched even less of this than Shield Hero, due to the characters not “clicking” with me at all.

Failure to connect to characters isn’t necessarily a sign of a bad anime. However, there are also a cases where I drop an anime due to poor story quality. Usually, even if the story quality is bad, I will still try to finish an anime. That’s how I got through watching some shows that I detest such as Seven Deadly Sins or Big Order. As for the ones I’ve dropped, they are mostly little-known anime series that I rare see anyone discussing. Examples include Tsubasa Chronicle, Coppelion, 11Eyes, and more recently, anime with overused concepts like Sword Gai and Sirius. It’s not that I particularly hated these series; they were below the point of me caring either way.

Why Do You Drop Anime Series?

What I’m curious about is why others like me drop anime series. I can think of some reasons that might apply to a lot of people. If any of the following is your reason for dropping an anime, let me know! I’d love some discussion.

Initial Reactions. Dropping an anime after one episode or less because your first impression is negative.

Visuals. Dropping an anime due to not liking the art/animation/character designs, etc. (Example: some people hate CLAMP’s art style, and will actually let that deter them from enjoying an anime. Or for another instance, dropping a mecha anime because the mechas are partly or fully CG.)

Fandom. Dropping an anime after becoming disgusted with the vocal fandom in comment sections and discussion threads. (I nearly did this. The series was hell to get through with that toxic fandom. Moral of the story: don’t bother with reading comment sections.)

Casting. Dropping an anime because, particularly with dubs, the casting doesn’t fit and/or the voice-acting is poor overall. (A great example is Rikka’s voice in the English dub for Chunibyo. She sounds awful and not remotely like the character she is playing.)

That’s it for today. Drop a comment if you have any time! Thanks for reading. 🙂