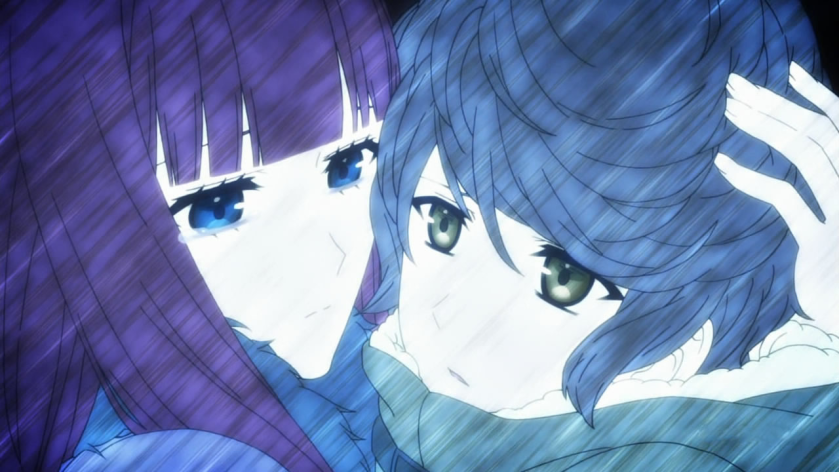 From the New World isn’t a dystopian tale in that it’s not about the protagonists defying the morally corrupt society. It’s about Saki’s personal journey and relationships, the strange beasts that inhabit the new world, and how things work for Cantus users. Still, it would be strange if nobody rebelled. Main characters Maria and Mamoru ran away from Kamisu 66. That’s a common action in dystopian stories (like Fahrenheit 451 or The Giver), wherein the ruling government is too powerful for central characters to fight.

Even so, given the tight control and unethical practices in Kamisu 66, isn’t it a little strange that there the humans of the villages don’t rebel? Actually, it isn’t strange at all. Consider that any child who seems likely to rebel against society can either be brainwashed further or simply killed off. People like Mamoru and Maria who flee the village end up being killed by Monster Rats as ordered by the Board of Education and Ethics Committee.

You should also understand that the vast majority of citizens in Kamisu 66 do not know the truths about child-killing, human history, or the outside world. A common mistake for viewers is to think that all the adults in Kamisu 66 know about as much as Tomiko or the False Minoshiro. Careful inspection of the SSY anime suggests otherwise. Here are some facts that illustrate my point.

In episode 16, in her letter, Maria says that her parents will be sad if she dies, but they will soon forget about her, just as Saki forgot about her own sister, Yoshimi. This and other evidence throughout the show suggests that friends, family members, and classmates of a child marked for death will have their memories of that child blocked off. Anyone, close or not, might have their memories blocked off if something big and disturbing enough happens.

In episode 12, Tomiko says that the recent incident with the Karma Demon (Shun) was so tragic that everyone in Kamisu 66 was made to forget. Normal citizens don’t remember that there used to be a seventh village called Pine Wind, nor do they remember anyone from that village.

Let’s continue with the verifications that adults don’t know much more than the children in Kamisu 66. They believe that Fiends and Karma Demons are real, yet none of the grown-ups know an actual definition of either creature. It would be too alarming for them if they knew Fiends and Karma Demons were actually human children with personality disorders or gene mutations. That’s why everyone has been taught from early childhood that those creatures are evil spirits or devils.

Speaking of demons, at age twelve, Satoru collected scary stories and rumors from the villages. One of the scary rumors widely known by children was about how anyone who saw a Demon Minoshiro would die. This suggests that Kamisu 66 kills off anyone who hears information from a False Minoshiro.

There’s also the example of the truth about the Bakenezumi. Everyone who studies biology or works in Mutant Management is told that the Monster Rats were originally Naked Mole-Rats which later had a few human attributes added to them via Cantus Power. Not even Saki would have guessed it was the other way around if not for Squealer’s words in the finale.

Normally, Satoru would never have been able to look at the Monster Rat genome, nor would Saki have seen the word history and scientific name of the species. They only discovered what they did because the village had no leaders yet, no one to watch over secret library documents, and no Impure Cats to stalk rule-breakers. These were only a few examples that show the adults in Kamisu 66 are clueless.

Of course, that doesn’t go for every single adult—just for the majority of them. A tiny minority must know and keep all the secrets and truths, or else the whole dystopian society would fall apart. The people most likely to be in the know are: 1) Head of Security Council Shisei Kaburagi, 2) Head of Occupations Council Koufuu Hino, 3) all or most members of the Board of Education, 4) Head Monk Jakujou from the Temple of Purity, and of course, 5) Head of Ethics Committee Tomiko Asahina.

In addition, I believe that Head Librarian and mother of Saki, Mizuho Watanabe, has a great deal of knowledge about the world and the village. After all, Mizuho had access to such items as the miniature False Minoshiro seen in episodes 22 and 23. The anime shows Saki’s mother withholding key information on a few occasions; perhaps that is why some viewers mistakenly think that all parents and adults in Kamisu 66 have the same level of knowledge.

The few who know the truths about child-killing, human history, and the outside world decide to stay and help, believing their actions are justified because of the very real danger of Fiends and Karma Demons. It’s quite possible based on her behavior that Saki might have rebelled after the disappearance of Shun if Tomiko hadn’t opened up to her about certain truths in episode 12.

There are a few other reasons why Saki and people like her don’t rebel against the corrupt society of Kamisu 66. First, let’s look at the villagers in general.

All the children and most of the adults are clueless about the truths of Kamisu 66, humanity, and the world around. Only a few leaders know the truth, and they don’t feel resentful toward society because everything they do is to prevent calamities like Fiends. Assuming there are some who would rebel or run away, they would probably be killed by Impure Cats or Monster Rats. If someone found out truths that would turn them against society, they could be brainwashed into forgetting everything.

There’s one other reason I want to bring up regarding why citizens don’t resist or run away. It’s because their genes and their lifelong conditioning have made them into a culture of love and peace with fellow humans, and great fear of the outside world. Just as they wouldn’t be able to make the hard decisions of the village leaders, the residents wouldn’t be able to start an uprising threatening the town’s harmony. To a degree that real humans rarely understand, members of “new humanity” love each other and their homes, and cannot tolerate conflict.

Supposing, though, a few of them did become defiant. Since they don’t know that killing is done by Impure Cats and Monster Rats, and they don’t have the same authority as the Board of education, ordinary villagers couldn’t arrange the deaths of the leaders. They certainly couldn’t use any direct violence, since they are programmed with Death Feedback. Others besides Maria might run, except that they’ve been far more extensively brainwashed than she was. They are crippled with terror and guilt at the mere thought of crossing the Sacred Barrier.

By now, it should be well understood why the villagers don’t fight back against Kamisu 66 leaders. But what about our surviving protagonists? In addition to the same reasons that other villagers don’t rebel, Saki and Satoru are not too unhappy with society. At the very least, they have no desire to tear it apart or change it roughly or quickly. The two of them hope to make small changes over time. They choose the more rational (if less “moral”) choice for their time and culture. At times, Saki is very unhappy with society; she says, “I hate the Board of Education,” vehemently in episode 19. Still, she was unwilling to fight them when they were trying their best to preserve the most lives.

Perhaps Saki and Satoru, having had so much interaction with the Monster Rat culture as well as their own, realize the important truth that no society is faultless. No society can even begin to touch perfection—that’s true today, in reality, and in the future, fictional world of Shinsekai Yori. Every social order has its evils, and no matter how cautious or prepared they are to deal with threats, they can fall to pieces from one weak link in the chain.

It may be better to accept a corrupt world and try to bring change slowly rather than start a riot, especially if that riot costs the health or lives of the people you love, or the harmony of the home you rely on. Saki may have considered taking leadership of the crumbled Kamisu 66 and radically changing everything as the main authority; she knows, however, that no society can exist without evil and weakness. She is also well aware that any major change would require sacrifice and bloodshed. Saki has seen enough bloodshed. She’d rather not start a war.

I hope you’ve enjoyed this blog post. See you next time on Anime Rants!