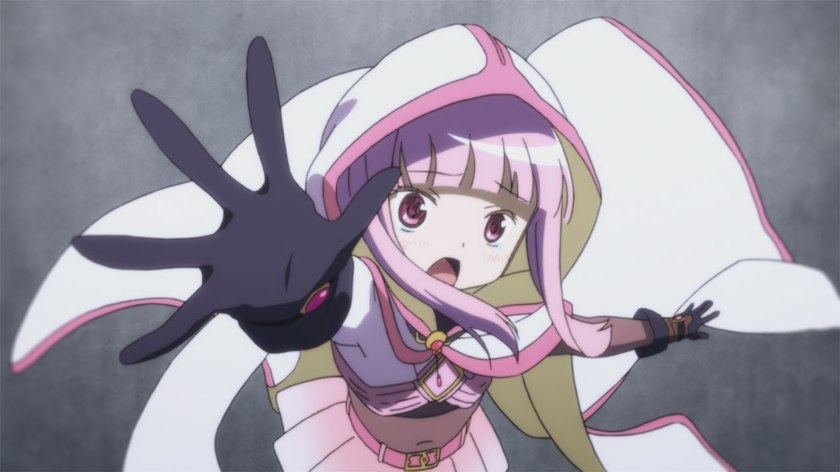 At the end of January, I finally went and watched Madoka Magica: Magia Record (Side Story). It’s a 13 episode series by Shaft that takes place in the Madoka Magica universe. I don’t have the energy for a full review, so here are some selected thoughts.

My opinion of Magia Record is definitely positive. I’m a bit surprised with how much I liked it considering how skeptical I was at the start. Don’t go into it expecting something identical to Madoka Magica thematically and in terms of story power. It’s a story of its own, with some of the same themes (hope and despair), but also softer ones (missing someone you love) and different ones entirely (the story of Sana and Ai). Magia Record isn’t as dark or as powerful as Madoka Magica, and it doesn’t need to be. As long as you understand the differences, you can’t go wrong with this anime. It’s quite engaging.

The plot drags along a little slowly at first, and some characters are just frankly a lot more interesting than others. Some were established and presented well, while others are sorely underdeveloped. I think there may be a few too many characters, so the balance of the show was slightly off. However, Magia Record still has some good characters. If nothing else, at least we have Iroha and Yachiyo, both with interesting thoughts and histories. I also enjoyed the characters Momoko, Mifuyu, Nemu, and Felicia. So to put it simply, there are too many extra things slowing down the story and too many extra characters– but the core story and the core characters are excellent.

As for visuals, at first I thought it was a different studio, but it’s still Shaft after all. It makes perfect sense that their style has changed in the almost ten years since the original Madoka Magica. Anyway, everything looked great. I love the witches. So much thought was put into each one. I can’t say much about the design creativity of the new characters, because I don’t pay attention to visuals very much. I remember very little of any character’s costume beyond color scheme. But since she gets so much screen time, I did notice some things about the appearance of Iroha, and I liked it a lot. She has best design, in my opinion.

So about what the fuck is going on, I don’t think it has been revealed by the makers. This is great because it means I stretch my mind a little and try some theories. Mami hints several times that she led Sayaka and Madoka into becoming magical girls. It’s confirmed that Sayaka is one already, so it’s safe to assume Madoka is too. This could be one of the timelines where Homura is still trying to save Madoka but didn’t prevent her becoming a magical girl. Also, Mami didn’t die in this world (yet). So this is a weird world where the Magius group is controlling witches in Kamihama and drawing in Magical Girls from all over, including Mitakihara. That’s one theory.

Actually, come to think of it, that’s really the most likely theory. I mean, this is definitely a world where there are witches, so Madoka hasn’t become god and probably won’t in this timeline. She’s just a normal magical girl. I guess it’s also possible that this is a chaotic world after Rebellion. But that seems really unlikely. In that world, the girls aren’t supposed to remember anything about magic. So things have really gone to hell if Mami and Sayaka rediscovered magic. What would Homura be doing? See, it doesn’t make much sense. That’s why Magia Record must be happening in an alternative world where Madoka isn’t god.

Those thoughts were just about where the story is happening in the grand scheme of the Madoka Magica Universe. What about what’s happening in Iroha’s story? She and Yachiyo, plus the other girls at the boarding home, are the main focus of the anime. There’s a lot of mystery and I haven’t even begun to unravel all the clues and possibilities. There are so many questions. Is Ui real? What is the baby Kyubey creature? How do Rumors harvest energy? How exactly do Doppels work and how did Iroha get hers? Who are the two Magia besides Nemu? What is the Magius planning to do that could even theoretically stop Walpurgis? It’s overwhelming.

The small Kyubey creature is the key to finding Ui, if she exists. That much seems pretty straightforward. But what is that creature? It’s not supposed to exist according to Kyubey. It guides and helps Iroha and helps restore parts of her memory, so it’s probably some kind of memory vessel. Why does that exist though? Why did Iroha forget Ui in the first place? Did Iroha’s wish include the erasure of her memories of Ui? Or did Ui erase her own existence? But either way, why? Is Kyubey playing dumb or does it really not know the truth either?

Currently, there are too many mysteries and I can’t make any interesting predictions. I plan to re-watch Magia Record once or twice while waiting for the second season. So perhaps I’ll pick up on more clues and ideas later. Oh and about season 2, nobody seems to have any idea when it will start. All sources I found predicted January 2021, but obviously, they were wrong. Perhaps it will launch in the spring 2021 season. We’ll have to wait and see.

That’s it for this short anime rant. Thanks for reading. Have a good one! 🙂